Last year's bike ride to Ladakh meant that Annual summer break this year would need to be spent at Home (in Nasik). Parents, wife, kids everyone had already gone there, a month before as soon as school holidays began. And with no options left (courtesy IRCTC tatkal booking) , I decided (note the positive frame of mind) to drive [Route map - http://goo.gl/maps/VTHqU (10-11 May, 2013)].

With almost 22k in 2 years (with minor dents (by 'my' standard though garagewala thinks otherwise) and major painting (by the 'expense bill' standard)) since I bought the car; I was still apprehensive because of experience of Jog falls trip. It was a quite a disaster - with one month in driving, I set out for terrible roads in hilly terrain of Jog falls. At dusk just when we were in deep forest and about 30-35 kms from the destination, the drive shaft on the left side gave away. It was one thing to be in the forest area driving merrily enjoying the green beauty and quite opposite to think about the wild beasts waiting for the dark before we could thumb a ride back to near by town. But situation forces man to bravery - hence here I was on a Friday afternoon 4 pm giving final touches to my preparation...

The PLAN when I started was to reach upto Belgaum or max Nipani by the night and then set out fresh - early morning for the rest of the journey. As it happens with 98.5% of the travel plans in the world (rest 1.5% are the Other people whose flight always arrives on time), this one also did not became reality. 30 mins in the driving, and I soon realized how deadly combination of google maps + GPS on my BB was when I found that I was still circling around Verna industrial area from where I began my drive. It was a quick deja vu moment : I had reached mollem national park crossing one hill, two mines and hundreds of curious stares (asking what the hell do you mean by honking the trucks on THIS road?) instead of taking national highway which was not shown in google maps. This time, I quickly adopted the strategy of asking every countryman - who wanted to thumb a ride - for the road directions (and thereby discouraging him:) ). 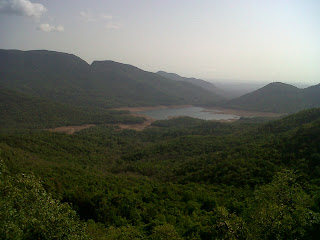 In almost two hrs since I began, I had crossed Amona and was on way to Chorla. And as I've realized many times past 3 years, thought again: Goa is overrated for its beaches and highly underrated for its forests. How many places in India, can boast of such a greenery  at the peak of summer in May !

I made a first stop at a vantage point in Chorla Ghat. The chorla ghat is a part of Sahyadri mountain ranges and provided one of the three main access routes to Goa from the deccan plateau. Refreshed by the harassing mountain wind,  I set out again for the next (sub)destination - Belgaum. By the time I reached, it was after office hrs and I struggled my way through evening traffic and pretty much decided to stop at the first decent place I see on the NH4. But 5 kms on NH4 after crossing the town - change the course of the evening and night !

For a fellow who has driven a car all his life in Goa (read two years) , NH4 is a cultural shock. Its like taking a child who all his life has thought the most wonderful place on earth is Splashdown, Goa and putting him in the Disney World.  National highway in Goa means you can overtake a truck provided you undertake the risk of getting run down by oncoming truck and survive with minor bruises (on state highways, you don't stand a chance, AVOID).

Belgaum to Pune ~ 350 kms was completed in 5 hrs ! It was the most enjoyable 5 hrs I've spent in a car. I even stopped the music for a long part of this journey and did not made any stop (except at toll booth). Its a zen like state when all your senses, mind (and even machine) are completely focused on one thing - DRIVE. A moment of perfect sync ! You could hear the smallest changes  - the sound of the gear engaging when you release the clutch peddle, the rustle of the bags in boot when you speed up/down, tyres making different sound on the tar and concrete road. Its almost like car responding to  various conditions /situations in different languages while talking to you all the time in soothing humming sound. Its one of these moments which Scott Adams explains in Machine Love.

It was past mid-night by the time I cross Pune. In my Pune to Nasik by Road is I made a small stop just before Chakan. One of my long pending dream (since year 2000 when I worked at NCL) is  to complete Pune to Nasik with Google maps timing (3 hrs 54 minutes). However, travel teaches us many things and one of the important lesson is NOT all of your dreams come true. Back on the road, I went back to the old ways of driving - cursing the bad roads, battering the oncoming traffic while following only two clear guidelines - 1. Don't hit anything and 2. Don't get hit. At one point, even at 3 a.m. in morning, I had to honk and wade my way through the crowded junction.

By the time I made to the outskirts of Igatpuri, the railway-town was just getting up for the morning trains leaving to Mumbai. After some minor traffic, reached HOME. My Son (5 months then) was already up and was excited to see me. My eyes were moist - not only because of holding him in arms after a month. The car standing outside knew my secret !

Written under The Perfect Road Trip
Posted by Unknown at 2:37 PM 2 comments:

It is the unknown around the corner that turns my wheels. 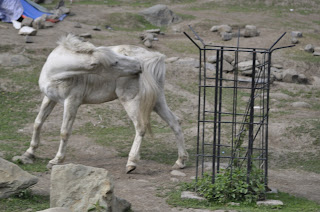 Resolved to make up for the 'lost time' day before, we started early. But this was Amarnath Yatra peirod and we were slowed down at various places by the on coming traffic of the yatri buses. So by the time we reached Srinagar, it was almost a noon time. Some time was wasted to find the mechanic to do a minor repair of bikes - oil, breaks, side-stand, head lights etc. Early lunch and we were on the road again...

The valley was totally different from the part of Kashmir we had been so far. Bustling with people and tourist and yet there was something in the air which made us tense. And that something was an ARMED military man every 50-100 meter with Gun in hand and giving his 'trained eye-scan' to the passing traffic. The security was heightened because of Yatra, but speaking with locals, we learnt that even in the 'slack' season, it does not drop to more than 1 guard per 150-200 meters range.

We had earlier thought that after Leh, we can drive only during the day time to clock upto 350-400 kms leaving evening at our disposal to roam through the city and have first hand 'kashmir experience'. That had to wait till the next time now. The traffic after worsened after Anantnag and at one particular junction we had to wait for over half an hour to regroup. The Kashmir in-the-mean-while kept us refreshing with views-on-offer .... 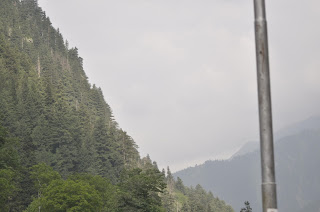 Huge traffic jam jsut before famous 'Jawahar Tunnel' (for frequent landslide news) was not surprising. We used the city two wheeler driving skills by overtaking the long queue of vehicles from where-ever we could find the way and reached in the front. And when the traffic was opened, it was quite an experience to drive through dark with no vehicle tail lamps to look as a guide. By the dusk we reached Ramban and then decided to make at-least upto Udhampur, but it got dark quickly and we had to stop at Patnitop.

That means only 260 kms in a day ... the hilly terrain has completely zapped us and left us with no option but to leave 0400 am next morning. This was the second last day of the tour and we had not used our raincoats and rain god did not take that as a good sign. We thought of using the the break for a quick breakfast while it was pouring. However, with no sign of clear skies, we continued the ride through the rain and then it behind when we crossed Udhampur. The group got again divided where there was a bypass directly to Pathankot without going via Jammu. I was on the regular highway - via Jammu.

It was a difficult ride till Jammu on a slippery & muddy road. Number of accidents, fallen trees had made the journey further slower. It was 10th day on road, without much required rest, sleep and during those 'solo' rides got us thinking that WAS IT REALLY WORTH IT ? The Stunning views, the terrain, mountains more than justified the trip. But then same could have been done with more comfortable itinerary with flights to Leh and then touring around in warm SUV. Not to forget the sunburn, skidding, crash, accidents, injuries -

Just before I was to take a Jammu city-bypass road, there was another jam and road was full of mud. One biker crossed me at one sharp turn, slipped and flattened on the road (with a possible fracture in leg). I stopped, splashed water, checked the fellow for injuries, tied his leg with a stick from nearby woods, checked with him about contact details, called his home, stopped a car behind, requested to drop him at the hospital while I waited near his bike for his family member to arrive. All this in short span of less than 10 mins. This is what the TRIP taught us. The ride apart from new friends; gave self-confidence to accommodate/tolerate new surroundings /people / habits, work through unexpected situation, take quick decisions and admit responsibility. But more importantly, the ride taught us how to live-in-present & accept life as it is (all-the-pleasant/unpleasant-noise-around included).

So going back to the earlier question, WAS IT REALLY WORTH IT ? - my answer is resounding YES - EVERY MOMENT OF IT !

The rode after Jammu was what we had dreamt for last three day. 110 kms of Jammu to Pathankot was covered in less than 90 mins and regrouped for lunch just after entering Himachal pradesh border. 220 kms in the morning session was not a bad start for the day when we intended to reach Mandi by night which was still 210 kms furhter down (or shall I say further up) the road.

The altitude again started rising though the road throughout was good barring small bridges connecting valleys. The next stop was somewhere after Palampur where we stopped for a quick snack and snap .. 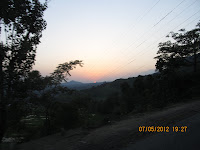 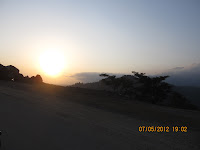 Further down the road bike headlamp gave-up and I rode with indicator lights ON and till I caught up with the group after which I drove in the middle. We reached Mandi just in time for the dinner.

The last day of the trip was supposed to be a late start but habit of last 10 days woke us up early. It was just 110 kms, and we started at it leisurely. The group got separated again in Kullu as some stopped for the water sports on offer and we took a small (old) road through apple farms via Naggar towards Manali.

We passed through a Naggar - a Place which was a capital of Kullu state for over 1400 years. Naggar palace - a small wooden building which holds the remains of its old glory - is a wooden building which HP govt is converted into a small hotel.  The tiny garden at the entrance welcomes you with a colourful flowers 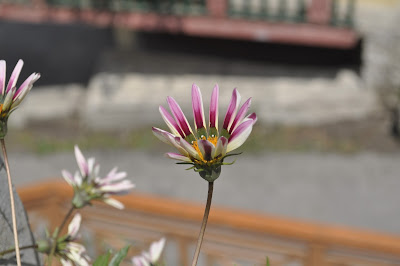 The view of a Kullu town through the palace corrodors - windows.

and some more flowers on the way out....

We returned the bikes in Manali, took a bus to Chandigarh. After quick shopping in the next morning at sector 17 market and we carry on to airport to start return journey to Mumbai.... 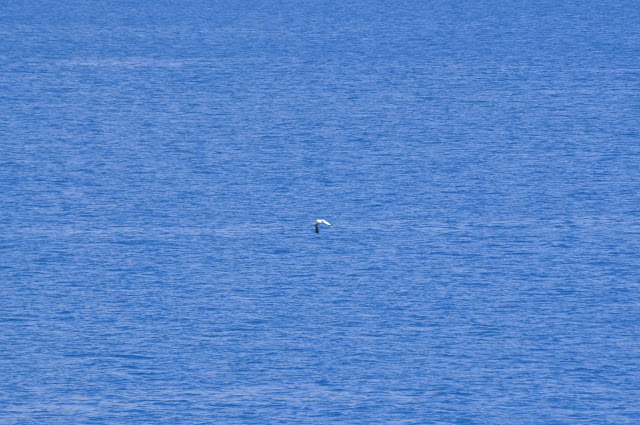